Links
"What you leave behind is not what is engraved in stone monuments, but what is woven into the lives of others."   Perikles  'Strategos' of Athens http://www.skirmishmagazine.com Magazine publication for Re-enactors and history enthusiasts. www.livinghistoryworldwide.com A social network forum for Re-enactors of every historical period on a global scale. www.salimbeti.com/micenei/index.htm The Greek Age of Bronze, Weapons and Warfare in the Late Helladic Time 1,600 -1,100 B.C. period. http://thereenactor.com/blog/category/ancient-greece/ Re-enactment blog site, profiles of re-enactors around the world. www.koryvantes.org KORUBANTES - Koryvantes, a Hellenic (Greek) Living History Club. Their focus is Ancient Greek Re-enactment, KOPYBANTES(Association of History Studies) Koryvantes. Athens Greece. (Since 2014 this group has been in decline)

http://www.amphictyonia.org/ International Reenactment Members of the Amphictyonic League who seek to re-create the best of the Late Archaic and Classical Greek World. (Website not active - but has a Facebook page for Member Group and individuals)- (Private group setting)

xerxesmillion.blogspot.com/2013/04/the-early-achaemenid-sash-and-weapon.html. A blog site dedicated to reconstruction of the ancient Persian military

www.comitatus.net/ COMITATUS From the UK, is a Leading Historical re-enacment group which spans the Late Roman Period, Hellenistic and Gladiatorial, Greek & Roman cavalry. The list goes on into the Medieval periods, worth a good look ! O' Pallas Athena, Protectress of the the City !  I begin to sing;

The dreadful one, who with Ares looks after War-like Affairs:

The sacking of cities of battle and the strife. She protects the

Hail goddess and may you give us good fortune and Happiness. 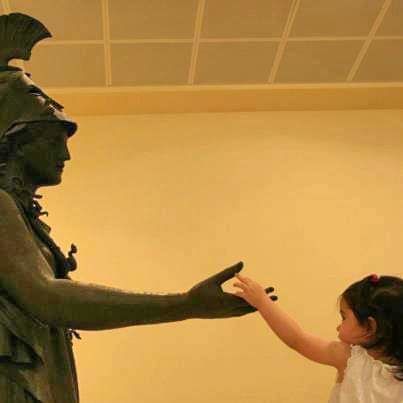 Ritual Hymn to Zeus before battle

War Cry "Eros-Anikate" Eros the Conqueror... We advance as a Phalanx!

15th Australasian Historical Conference 2009 The highlite of the Conference was the "Battle of Marathon, Archaeological Experiment". The groups that took part were, the Sydney Ancients, Mare Nostrvm of Brisbane and the Ancient Hoplitikon of Melbourne. Our objective was to simulate the conditions of Hoplites in Phalanx formation, under stress of arrow fire. Discipline and teamwork was effective and injuries were minimal. We hope to repeat this experiment in future with more members and archers too! Networking with our companions before battle

Closing in on the Archers, ever-so confident!

MACH TOU MARAQONA 490pc. THE BATTLE OF MARATHON 490 B.C. John Stuart Mill famously suggested that the "Battle of Marathon, even as an event in British History, is more important than the Battle of Hastings". The Athenians and the Plataeans had dashed a mile in their armour to meet the Persians. The chorus of Aristophanes' Wasps, 'Marathon Men', sang of how they had run through the arrows to reach the Persians and shoved them back until evening. It was the first time a Greek Army had successfully faced the Persian enemy and demonstrated the superiority of Hoplite tactics and equipment. The Greek advantage in discipline, morale and technology on this occasion proved decisive. http://www.danaxtell.com/marathonanniversary/ A website dedicated to establishing the 'Actual' date of the Battle of Marathon 2,500 year Anniversary 2011 !

Phalanx drill on the Parade ground with Peltasts